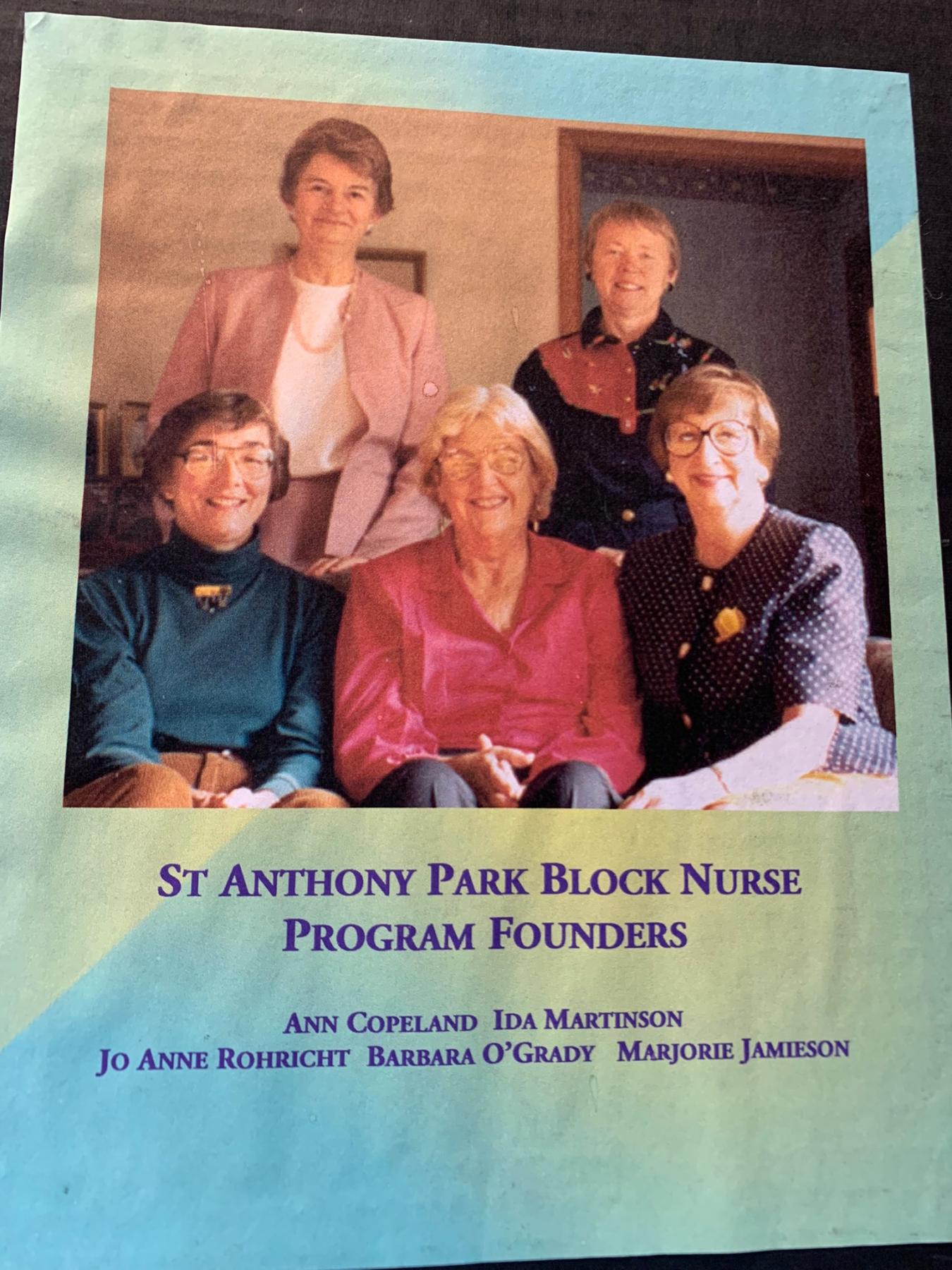 Ida Martinson from the nursing faculty at the University of Minnesota was serving on the National Institute on Aging and participated in the White House Conference on Aging.  She sought to apply her background in hospice and in-home care for very sick children to the needs of the elderly.  At the time only medical services provided in institutional settings were covered under governmental and insurance regulations.  Seniors were independently and often unsuccessfully trying to meet their medical and home care needs by themselves.  Martinson believed that communities could come together to aid these elderly residents in need of physical and emotional support.  Help could come from paid public health nurses and home health aides and volunteers.  By receiving in-home care, clients could stay in their own homes for extended periods, preserve their quality of life and remaining a part of the community network and at the same time avoiding expensive nursing home costs.

JoAnne Rohricht wrote an article for the Park Bugle about Martinson’s participation in the White House Conference on Aging and included a description of the “block nurse program” as Martinson had described it.  There was so much positive response to the Park Bugle article that Rohricht then hosted an organizational meeting to explore the idea further.  Martinson, Rohricht, Ann Copeland (then District 12 Community Organizer), and State Representative Ann Wynia attended.

Later Martinson talked with former Minnesota governor Elmer L. Andersen of H.B. Fuller Co. (they attended the same church in St. Anthony Park) about possible help with start up funding.  Within a week the new organization had submitted a grant proposal requesting assistance.  By April 1982 they received a grant from the Fuller Foundation and assistance from Medtronic Corporation, for what was needed to begin the project.

The founding group of the St. Anthony Park Block Nurse Program expanded to include Marjorie Jamieson, and Barbara O’Grady, Director of the Ramsey County Nursing Service.  Jamieson became the director of the program and O’Grady worked closely with the program as they developed a way to pay nurses.  They hired a block nurse and a block home health aide and trained seven neighborhood residents in peer counseling to be home visitors.  The Community Service Committee of the District 12 Community Council helped design a system to involve teens, college students, scouts, churches, and service clubs in providing aid to seniors.  The program received several awards including a proclamation from Governor Perpich applauding the program, an achievement award from the Midwest Alliance in Nursing, an “Innovations in Government” award for $50,000, from the Ford Foundation and Harvard University, a “Spirit of Service Award” and a proclamation from the Ramsey County Commissioners.

In addition, the LAH/BNP, Inc. was to be a technical assistance center to support the growing number of local Programs.  With funding support from a number of local and national foundations, replication materials were created and disseminated, resulting in more communities with LAH/BNPs.

Based on demonstrated outcomes of the program, the State of Minnesota agreed to partially fund seven existing sites and six new sites with annual grants of $20,000 each.  Today this state funding has been expanded to support thirty-one sites and constitutes approximately 36% of a typical program’s annual revenues.

Living at Home/Block Nurse Program, Inc., began doing business as Elderberry Institute, an education and outreach arm for LAH/BNPs. The purpose of Elderberry Institute was to extend and support LAH/BNP programs wherever they may be needed, but they were to especially focus on the heartland, from Minnesota to Texas.  They subsequently established a Regional Resource Center to support program development in Texas.  The programs in the upper Midwest were supported from the Institute’s office in St. Paul, MN.  By the end of 2002, there were 40 local programs serving elders in communities across Minnesota, the first North Dakota program had begun in Enderin, and five programs were operating in the greater Fort Worth/Dallas area.

SAPBNP expanded its offerings in three ways. In an effort to help seniors avoid falls and to increase their social interaction and general well-being, the Exercise Program was increased from two to five classes each week.  The program’s transportation program then grew because people needed rides to these classes.  The requests for rides to medical appointments had steadily increased since then as well.  Lastly, the Education Program expanded with more public speakers sharing knowledge and expertise on caregiver issues and other age-related topics.

In response to requests from exercise class participants, St. Anthony Park Block Nurse Program began offering group social outings.  Averaging about one every three weeks, these get-togethers provided opportunities to see places, events, and people that they normally would not if they had to go alone or because they had no transportation.

The Living At Home/Block Nurse Program, Inc. was restructured to help its now 44 local neighborhood-based elder care programs prepare for Minnesota’s demographic shifts.  At that time Elderberry Institute’s name was changed to Living at Home Network (LAHN) and its board was restructured to include representation from block nurse programs and senior servicing agencies.  We continued to be an active member of the Living at Home Network and received many forms of support and assistance from it.

St. Anthony Park Block Nurse Program celebrated its 30th Anniversary.  Throughout the year special events were held celebrating the clients and honoring supporters of the program, past and present:  seniors, caregivers, volunteers, donors, benefactors, staff.  In order to better reflect who we served, rather than just one way in which we do it, St. Anthony Park Block Nurse Program changed its name to St. Anthony Park Area Seniors (SAPAS) and changed its logo from three overlapping blocks to a “tree of services” on July 1, 2011.

St. Anthony Park Area Seniors fulfilled requirements for the “Meets All Standards” rating by the Charities Review Council, which reviewed 27 areas of accountability in our performance including public disclosure, governance, financial activity, and fundraising.

With a Board of Directors of 15 area residents, over 100 volunteers, and three paid staff working out of the program’s same location of more than three decades, we looked forward to providing the same quality service to our St. Anthony Park area seniors and their caregivers in the years to come.

The recent past has seen several major changes.  First, SAPAS’s targeted population was lowered from 65+ to 60+.  Younger seniors were calling for assistance with retirement transitions, including Medicare and social security applications.

There was also a need for a stronger focus in the Lauderdale part on the program service area.  SAPAS began with more marketing of SAPAS services and program presence at community events and followed with a twice-weekly exercise class which began in October of 2013.

More participants meant a need to recruit more volunteers.  SAPAS’s third goal of seeking financial support from more sources was key to addressing this need.  Out of this effort came funding for a half-time Volunteer Coordinator.  This need will only grow as baby boomers age.

As SAPAS looked to the future early in 2014, it embarked on a formal community needs assessment with the assistance of the Amhurst H. Wilder Foundation.  Eight focus groups were held in May, and that input and other research was shared at community forum in September.   With more information gathered from that meeting, a final report enabled SAPAS in early 2015 to strategically plan for future years.  SAPAS would target four senior-related issues:  housing, transportation and walkability, caregiver support and at-home living assistance for seniors.

Also in 2015 SAPAS held its first annual fundraising event.  The event, Sippin' Suds for SAPAS, was held in mid-June.  More than two hundred people gathered at Giggles' Campfire Grill on the Minnesota State Fairgrounds to taste beers from 11 craft breweries and sample State Fair food.  Twenty-eight individuals and businesses donated items for the silent auction at the event.

To keep up with the demand for foot care, in December 2016 SAPAS began to work with an independent contractor to provide foot care to seniors in their homes.

SAPAS expanded the annual volunteer recognition event to include senior participants and neighbors.  In the spring of 2017 SAPAS held this "Sweet Celebration" for the first time out on the lawn and shared ice cream treats with all who attended.   Some participants enjoyed playing Corn Hole out on the lawn in the May sunshine.

In the spring of 2017, two ideas that had been percolating were brought into reality.  The Sippin' Suds for SAPAS fundraiser took a slight turn and was held at the Urban Growler in St. Anthony Park.  Attendees purchased tickets and enjoyed an afternoon of food, drink, music and socializing with their neighbors.  SAPAS also expanded its partnership with the SAP Library by coordinating regular Older Adult Resource Series (OARS) presentations planned by SAPAS and held at the library.  Some of the presentations have included presentations on adaptive equipment, Medicare, scams aimed at seniors, questions to ask your health professionals and wills/healthcare directives/Power of Attorneys.  These presentations have been a fantastic way to meet new seniors and offer education that they are seeking.

In fiscal year 2018-19, SAPAS conducted a survey that revealed that some new services that SAPAS began to provide.  Using the independent contractor model, SAPAS began to work with a handyman who lives in the SAPAS service area.  SAPAS leadership also decided to pilot a "check in" service to give peace of mind to seniors and their families.

In 2020 this "check in" serviçe blossomed into a fee-for-service offering called Hello Service.  In order to offer something new for caregivers SAPAS hosted several monthly breakfasts for caregiving pairs.

As COVID-19 appeared our services and activities were up-ended. The SAPAS staff rose to the occasion.  They rotated working in the office one-at-a-time with working remotely in their homes. Some activities such as in-person movies were put on hold.  Others such as yoga class went online. Board and committee meetings moved online with Zoom.

IPads were made available for loan to clients along with with technology assistance when needed. A poetry class and musical concerts were presented online.  The staff facilitated an online one-hour gathering most months to provide a space for conversation and social connection.  Presentations by experts such as Medicare and Technology for Older Adults and Those They Care For were presented online.  Protocols were developed for services that could not be offered remotely, such as Foot/Nail Care and driving clients to medical appointments.  When vaccines became available, we facilitated and hosted a vaccination clinic.
After a lengthy trial and offering of Hello Service with broad publicity, it was determined that there was not a baseline level of interest to make it sustainable for our current or additional staff to continue offering it, so a decision was made to phase it out by July 1, 2022, with appreciation that we had tried this.

Check the latest status at our COVID Info page.